Subdepartment of Histology, Cytology and Embryology was organized in 1932. During the two first years it was united with the subdepartment of Anatomy and was called “Subdepartment of human morphology”, at that time it was under the leadership of professor P.O. Isayev. Lectures on Histology were delivered by professor V.V. Averburg (from zooveterinary university) who worked as a part time teacher. Practical lessons were conducted on the basis of zooveterinary university. The subdepartment at that time had seven microscopes, sixty histologic specimens and two educational tables.

In 1933 the subdepartment received own premises of forty square metres in area. Considerable subsequent work concerning the improvement of teaching was done by Z.F. Guseva, who was appointed head of the subdepartment in September of 1934. In 1937 the first positions of assistants were confirmed, and A.V. Kirillicheva and I.S. Novic were taken on the staff. 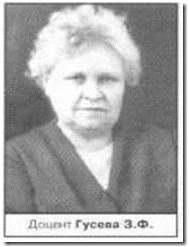 During the Great Patriotic War the staff of the subdepartment was increased due to pedagogues evacuated from the central Medical Universities. From 1941 till 1945 the work of the subdepartment was headed by L.I. Falin. At the same time the assistants V.V. Anisimova, M.N. Richina , E.D. Piskunova were taken on. Under the leadership of L.I.  Falin the educational process was changed: the course of evolutionary Histology and Embryology was increased. 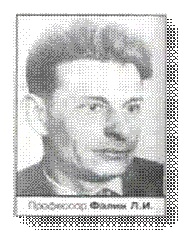 Professor Falin L.I. delivered lectures excellently, he was an exacting examiner, and gave o lot of time to raising the level of the collaborator’s professional skills. All the instructors did research work. In 1943 the first dissertations were defended. Falin L.I. defended his doctoral dissertation on the subject “Morphology and pathogenesis of the teratomas of gonads” in which he suggested a new original theory of timorous development from gonocytes. 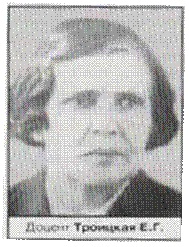 With her participation considerable methodological work at the improvement of teaching was done, subject of lectures became more extensive, instructions for practical lessons were written. The subdepartment was transferred to the new building, additional lecture rooms and microscopes were given. Collection of educational tables and histologic specimens was increased.

Research work of the subdepartment at that time was various. E.G. Troitskaya investigated the morphology of primary tuberculosis in the adult. Z.F. Guseva continued the earlier begun investigations, and in 1950 she defended candidate’s dissertation. In 1958 N.N. Beliayeva defended candidate’s dissertation on the subject “Age-related features of the human kidneys in postnatal life”. 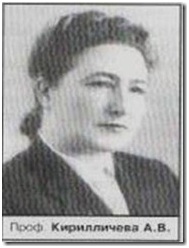 From September of 1959, in connection with retirement of E.G. Troitskaya, the associate professor A.V. Kirillicheva was elected to a position of the head of subdepartment. She leaded the subdepartment till 1971. She paid much attention to organizational issues, and to the improvement of educational trainings. At that time the new educational methods (programmed control) were introduced.

Research work was increased because of such subjects as histogenesis, tissular reactivity, regeneration, evolutionary dynamics. United scientific subject was chosen “General appropriateness of morphogenesis and regeneration”. 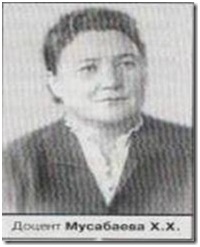 A.V. Kirillicheva paid much attention to scientific work of the students, and she was a head of students’ histologic circle for several years. She prepared three graduates – R.I. Yui, M,S, Kalinina, G.V. Fedorovskih, who defended dissertations on the following subjects: “Cytological and cytochemical investigation of the pancreas of man and animals in ontogenesis” (R.I. Yui), “Influence of methionine on the reactive properties of connective tissue in experiment” (M.S. Kalinina), “Morphohistochemical changes in the kidneys under the influence of some experimental factors” (G.V. Fedorovskih).

From 1971 till 1983 the associate professor H.H. Musabayeva was at the head of the subdepartment. She continued to improve educational program taking into consideration the specialization of different departments of the university.

Under the guidance of H.H. Musabayeva such research subjects as D-vitamin deficiency”, “Imbalance of balanced feeding on histogenesis and structure of inner organs” were developed.

At the same time associate professor R.I. Yui carried out research work on the subject “Combined influence of ionizing radiation and dynamic factors on morphological and functional condition of inner organs. This work was defended as doctoral dissertation in 1988. 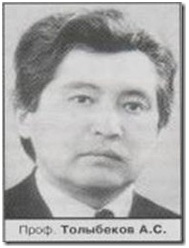 From 1983 till 1998 professor A.S Tolybekov was at the head of the subdepartment. At that time the problems of the influence of environment on organism were investigated.

In common with the first Moscow Medical University the lecturers of the subdepartment published the manual for students “Laboratory lessons on Histology, Cytology and Embryology” (Moscow, 1990).

From September of 1998 professor Yiu R.I. is at the head of the subdepartment. Under his guidance the research subject “Cytological aspects of the daily rhythms of inner organs in the condition of changing environment was developed. Four candidate’s dissertations were defended (Kruglikovskaya T.F., Ergasina M.J., Asambayeva D.E., Rybalkina D.). Besides, much attention is paid to the improvement of educational methods.

The lecturers of subdepartment published standard program on “Social public health”, 2008, “General medicine”, 2008, and “Stomatology, 2008. Professor Yui R.I. published the manual for the students of stomatological department “Fundamentals of Histology of the oral cavity and teeth”, in the Kazakh and Russian languages (1996, 2001). Senior lecturer Ayapova Z.O. published “Metodological instructions on Histology, Cytology and Embrryology for lecturers” in the Kazakh language. Textbook on Histology (2007). Abildinov R.B., Ayapova Z.O., Yui R.I. “Atlas of Histology, Cytology and Embryology” in the Kazakh and Russian languages (2006). Yui R.I. and Naumova L.I. published “Tests on General Histology” and “Tests on Special Histology” (2009).

Reseach  work of the subdepartment of Histology

From 2000 research work at the subdepartment of Histology was carried out in accordance with “Study of morphologic changes in tissues and cells under the influence of environment on the organism”. Supervisor of the study was the heаd of subdepartment of histology, Doctor of Medicine, professor Yui R.I.

Within the theme the senior lecturer Kruglikovskaya T.F. carried out research work and then she defended Candidate’s dissertation on the subject “Morphologic and functional description of spermatogenetic epithelium under the influence of phosphin on rat’s organism”. Results of the research work were criteria of the evaluation of unfavourable influence of Phosphorus industry on organism. At present the research work of the subdepartment is oriented to the search of methods of diagnostics and monitoring of the condition of oral mucosa with the purpose of health improvement of people of different age and sex. From 2000 the educational workers of the subdepartment worked out methods for study of the cytogram of oral mucosa, methods of glycogen detection in epithelium, and method of morphodensitometry. Technological level of the morphologic laboratory is enough to carry out that scientific project. As a result the six stages of differentiation of mucosal epithelial cells were determined.

Associate professor Ergazina M.Z. determined the time of acrophase of biorhythm of differentiation of the epithelium of gingival fluid in people of male sex of morning biorhythmology type at different ages. She showed possibility of detection of the exact time for preventive chronotherapy of the periodontal diseases. The method of chronotherapy of chronic catarrhal gingivitis and chronic generalized periodontitis is used at the subdepartment  of therapeutic stomatology and at stomatological polyclinic. Ergazina defended Candidate’s dissertation on the subject: “Cytofunctional analysis of diurnal rhythm of the gum at different ages”.

Semchenkova S.A. (who was responsible for the research work at the subdepartment) participated in the collection and analysis of the material for comparative investigation of buccal epithelial cells of males, nonpregnant women during sex cycle, pregnant women during different trimesters of normal pregnancy, and of women during postmenopausal period. As a result of this work the dependence of the oral mucosa on sex, and the condition of menstrual function in women was determined.

Results of the research were used during realization of the programme “Medical and biological foundation of pathology and health protection” as regulations for examination of drug addicts, cases of lichen ruber planus, gastric ulcer, duodenal ulcer, reflux esophagitis, pancreatic diabetes of the second type. Assiciate professor Kalinina M.S., senior lecturer Kruglikovskaya T.F., senior lecturer Tusupova N.M., senior lecturer Jangeldina Z.N. took an active part in realization of the programme. On the subject of the project the postgraduate Asanbayeva D.E. defended Candidate’s dissertation “Cytological description of the diurnal rhythm of oral mucosa in normal condition and in case of gastroesophageal reflux disease” (2007).

The subdepartment of Histology successfully carries out the methodological work.

For the purpose of improvement of teaching, from the year 2012, practical lessons on General and Special Histology for the students of the second course of stomatological department are conducted using the method of “CASE-STUDY”. Lecturers of the subdepartment worked out necessary guides on all the subjects both for students and lecturers, with due regard for five competence. Besides the workbooks for independent training of the students are also prepared.

The method “CASE-STUDY” is a command method, it is one of innovative methods which is used in small groups for training of personnels in medical universities. This method intensifies the understanding and creative work of the students. This method enables the students to use their knowledge actively, compels them to substantiate their points of view, and to respect the opinion of their opponents.

Due to such method the lecturer ceases to be a source of prepared knowledge, but imparts independence to the students, and in this way the students become active members of a team. The lecturer only controls this process.

Practical lessons for the students of the third course of the “General medicine” department are conducted in accordance with the modular system. At the lessons the lecturers use albums, photomicrographs, tests and clinical and situational tasks that were prepared at the subdepartment.

At the subdepartment there is a multiocular microscope, with the help of which the whole group of the students is given the opportunity of simultaneous investigation of histologic structures, and discussing them on the basis of their knowledge.

For the more considerable improvement of the quality of education, the teaching staff of the subdepartment wrote and published “Workbook for lecturers” on the subjects of “Genertal Histology” and “Special Histology” (2010) in the Kazakh and Russian languages. These manual is intended for practical lessons conducted at the department of Stomatology and General medicine. The teaching staff of the subdepartment also published “Atlas of Histology, Cytology and Embryology” (2006) containing a large number of photomicrographs, illustrations, diagrams, and “Atlas of photomicrograps” on Histology, Cytology and Embryology (2012) intended for practical lessons.

For the purpose of developing the self-perfection of the students, the lecturers of the subdepartment prepared “Methodological instructions for independent work of the students on the subjects of General and Special Histology”. Each of those instructions includes the following tasks:

● Questions on the subject of independent training

At the end of instruction there is a list of sources of information. The independent work of the students is estimated in accordace with one hundred-point scale.

Criteria of the estimation:

● Answers to the questions – twenty-five points

For the control of knowledge the teaching staff of the subdepartment published tests on General and Special Histology (2010).

In this way educational methods of the subdepartment of Histology promote the increase of activity of the students, and help them to make use of their skill in concrete situations.